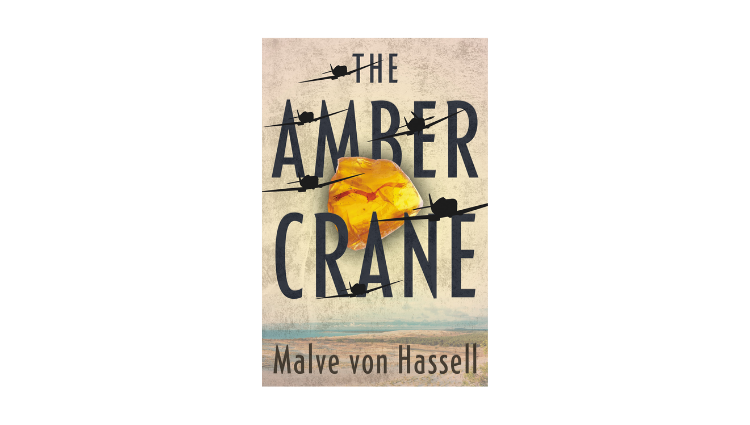 The Amber Crane centers Peter, a fifteen-year-old apprentice who creates prayer beads for his guild. The guild provides the community with their basic needs, but this same power is also used to control people, like setting specific prices for goods and controlling who and what people can sell, including the amber Peter uses at his workshop. It is forbidden for anyone to possess a precious stone like amber for themselves, but when Peter finds a chunk of raw amber, he keeps it. The magic it unlocks will leave him, and readers, in awe.

In a dream, Peter sees a girl, Lioba. She sees him too, and they soon discover they can talk to each other, be with each other, but they are living three hundred years apart from each other. How are they connecting? And why?

Peter is the main character, so the book largely takes place in his timeline. Von Hassell formats the time-travel so that we only get flashes of Lioba’s timeline, at the tail-end of World War II. This makes Lioba’s story all the more compelling and raises the stakes as Peter struggles to balance his own life’s challenges with hers.

Lioba and Peter’s dynamic is not as fleshed out as it could’ve been. Their conversations are fast-paced and witty, and though they are from two very different time periods (1944 and 1644 respectively), they complement each other well. But upon first discovering their ability to connect with each other, neither of them deeply questions or are really frazzled by how time-travel works, so this detail feels glossed over.

The scenery is one of the highlights of the entire book. From windy beaches to muddy farms to cluttered workshops, every scene is full of sensory details that will transport readers back in time. It is especially impactful that these scenes are so well described because when time-travel comes into play, it emphasizes why Peter is so shell-shocked to be experiencing a different time period. And of course, the best descriptions were those for the amber stones, each of them unique and almost embodying different energies that reflect their varying shapes and colors.

Peter’s sister, Effie, is a big part of his storyline, and though Peter spends the majority of the book seeking a resolution to a problem that is about her, his sister is rarely involved. Everything happens around her, not with her. People talk about her, not to her, and it is a bit disappointing that she never gets a solid moment of redemption where she gets to step into her own power.

In the making of this book, von Hassell referenced eye-witness accounts to make the settings and interactions as authentic as possible. Their research and effort paid off, because the book feels like a true depiction of the times that they take place in. Not only are the physical descriptions of the times depicted well, but the spirits of the people are also touching and effective.

In The Amber Crane, two people that couldn’t be more different from each other find companionship as they realize that though time separates them, they are connected by something greater than them. Von Hassell skillfully creates scenes that will transport readers to a different time, a different life. Detailed and atmospheric, The Amber Crane has songs, poems, physical places, and symbolism threaded throughout that creatively and respectfully embody two of the most destructive wars in history. A cross between historical fiction and science-fiction, this compelling story will keep readers glued to the pages.

Malve von Hassell is a freelance writer, researcher, and translator. She holds a Ph.D. in anthropology from the New School for Social Research. Working as an independent scholar, she published The Struggle for Eden: Community Gardens in New York City (Bergin & Garvey 2002) and Homesteading in New York City 1978-1993: The Divided Heart of Loisaida (Bergin & Garvey 1996). She has also edited her grandfather Ulrich von Hassell’s memoirs written in prison in 1944, Der Kreis schließt sich – Aufzeichnungen aus der Haft 1944 (Propylaen Verlag 1994). She has taught at Queens College, Baruch College, Pace University, and Suffolk County Community College, while continuing her work as a translator and writer. She has self-published two children’s picture books, Letters from the Tooth Fairy (2012/2020) and Turtle Crossing (2021), and her translation and annotation of a German children’s classic by Tamara Ramsay, Rennefarre: Dott’s Wonderful Travels and Adventures (Two Harbors Press, 2012). The Falconer’s Apprentice (namelos, 2015) was her first historical fiction novel for young adults. She has published Alina: A Song for the Telling (BHC Press, 2020), set in Jerusalem in the time of the crusades, and The Amber Crane (Odyssey Books, 2021), set in Germany in 1645 and 1945. She has completed a biographical work about a woman coming of age in Nazi Germany and is working on a historical fiction trilogy featuring Adela of Normandy.