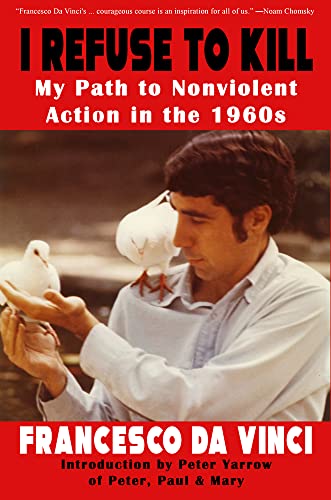 Francesco Da Vinci paid a heavy price for his stand as a conscientious objector to the Vietnam War. Putting conscience above all, Da Vinci refused to flee to Canada or dodge the draft with a fake deferment. As a result, he battled the country he loved; endured scorn from his family, friends and fiancée; and faced a five-year prison term.

Today, the prominent 1960s peace activist stands in solidarity with the Russian people brave enough to protest their country’s invasion of Ukraine.

On his social media pages, Da Vinci writes, “Putin’s regime will ultimately collapse because loyalty to him is forced, not earned. This is Putin’s war; not the war of the Russian people.” Da Vinci adds, “I know what it means to stand up to the country you love and say ‘No’ to war. In your country and in my country, we know that military might does not make right. There are many of us in America that stand with you and admire your courage.”

Now, Da Vinci shares his own dramatic transformation from bystander to nonviolent activist in his new book, I Refuse To Kill: My Path to Nonviolent Action in the 1960s. Drawing upon journals he kept for more than a decade, Da Vinci chronicles both personal and historical events in vivid detail and draws parallels between the divisions of the ’60s and the unrest of today surrounding social justice, police brutality, government surveillance, persecution of nonviolent activists and war versus the nonviolent resolution of conflict. Written in the spirit of reconciliation, I Refuse To Kill gives voice to those who believe in countering violence with nonviolent action.

Musician Peter Yarrow had this to say: “This amazing timely story confirms that one person, acting with courage and conviction, can successfully oppose war and help change a part of history. Francesco Da Vinci’s story reminds us that acts of conscience are never pursued in vain.”

Da Vinci states, “The contributions of COs and ’60s activists have been largely omitted from our history or flagrantly distorted for political reasons. I Refuse to Kill sets the record straight.”

Historian Noam Chomsky: “Francesco Da Vinci’s courageous course is an inspiration for all of us.”

Francesco Da Vinci is a screenwriter, author, nonviolent activist and public speaker based in Los Angeles. Previously, for more than 20 years, Da Vinci was a celebrity portrait photographer with Getty Images. His work has been featured in The New York Times, The Los Angeles Times, The Washington Post, Newsweek, Time and LIFE Magazine. Recently, Da Vinci and co-writer Tom Stohlgren adapted I Refuse to Kill into a dramatic screenplay. The film will promote social justice and nonviolence. Around his writing and film work, Da Vinci gives talks that pay tribute to conscientious objectors to war, past and present.