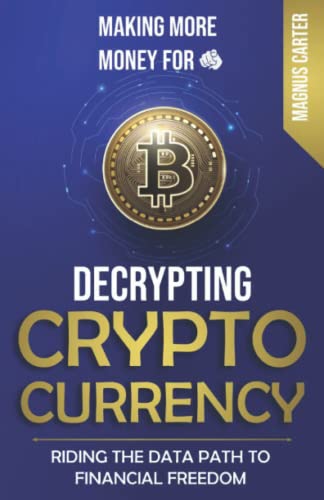 The word “cryptocurrency” has been dominating the investment sector for a decade, but quite a few would-be investors remain unaware of its potential impact on their portfolios.

The unnecessary use of technical jargon and talk of “get rich quick schemes” are partly to blame for deterring individuals from taking the plunge, points out Magnus Carter.

In his detailed new book, Making More Money for You! Decrypting Cryptocurrency: Riding the Data Path to Financial Freedom, Carter takes a no-fluff approach and uses easy-to-understand language to explain what he says is a “simple concept.”

“To a novice, cryptocurrencies sound like an alien concept. But, it has a history going back to the ’90s and is nothing difficult,” Carter says.

Based on a revolutionary system called “blockchain technology,” cryptocurrency is a way to send monetary value without a third party.

“When cryptocurrencies started being used, the entire world showed interest and invested money in them,” Carter adds. “Because of it, the prices of individual cryptocurrencies grew, and people owning them became millionaires.”

In his book, Carter demystifies the world of cryptocurrencies, giving readers a clear explanation of the different types of cryptocurrencies and blockchains, plus step-by-step guidance for investing. He spells out the advantages and long-term benefits, plus the precautions investors should take to avoid pitfalls. Chapters are filled with tips and tricks to help readers put their money — and their cryptocurrency — to work.

“This industry has given a chance to the general public to make more money than they ever could working in 9-to-5 jobs,” Carter says. “Investing in cryptocurrencies will enable you to make more money, and I will show you how.”

Magnus Carter has been in the workforce since he was 12 years old. At age 21, he was working at a diner in New York City when he started to notice that all of the customers were wearing nice clothes and jewelry, and driving fancy cars. He asked a gentleman how he could afford all these things. That conversation sparked a fire in Carter and forever changed his outlook on life. He learned that making money wasn’t the only thing he needed to do. He needed to use the money he made to make money as well. His passion for investing in a brighter future took him further than he ever dreamed. He has made many mistakes and learned many new skills, and he enjoys sharing this knowledge with others. This is a second book from Carter, following up on his Making More Money for You! Mutual Fund Investing on a Budget for Beginners.