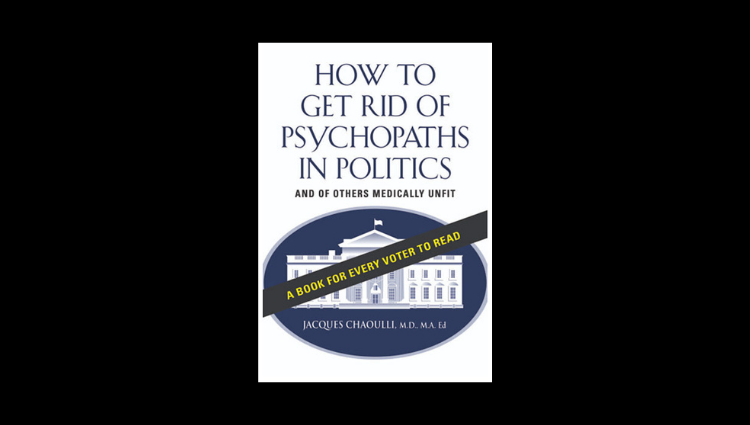 At a time a survey showed 92 million American voters want Trump to be banned from running again for office, Boris Johnson’s pathological behaviours led to a mess with Brexit, Brazilians and Indians calling for the removal of their leader Jair Bolsonaro and Narendra Modi for their mishandling of the Covid-19 crisis, it is time to rid the psychopaths from politics.

In this hugely provocative read, the author cites the assault on the US Capitol in January 2021 as the catalyst for his essay. Raising utmost important issues this is a book that every voter should read.

President Joe Biden’s episodes of confusion and memory lapses are worrisome. Chaoulli says: “It is just unbelievable that the commander in chief, enjoying the power of deciding the use of nuclear weapons, is not subject to a compulsory mental health examination by independent medical experts.”  Since decades, former President Jimmy Carter, among others, called for it, but with no detailed solution.

This essay proposes a step-back analysis, of interest for voters in all countries holding free elections. It reconciles political philosophy and neuroscience, leading to a sensible solution. All elected officials, and individuals willing to run for office, should undergo a compulsory mental and physical health examination, conducted by a panel of independent medical expert, with specific criteria for appointment and for avoiding political bias. Those refusing to comply, as well as those found unfit, would be removed from office, or banned from running for office.

To get it done, voters, whatever their political affiliation, would have to require from their elected representatives, either the adoption of constitutional amendments proposed in this essay, or the power to directly amend the Constitution. Reluctant politicians—informed about the opinion of a majority of the population in favour of such propositions—would know that they might not be elected or re-elected at the next election.

Dr Jacques Chaoulli has been praised as a hero in Canada and in the United States for a landmark ruling at the Canadian Supreme Court, in favor of patients who were suffering and dying on waiting lists.

In addition to his medical expertise, Dr Chaoulli is self-educated in law and political sciences. He has had a decisive influence in the United States over California and Massachusetts’s governors and former President Obama’s healthcare reforms.