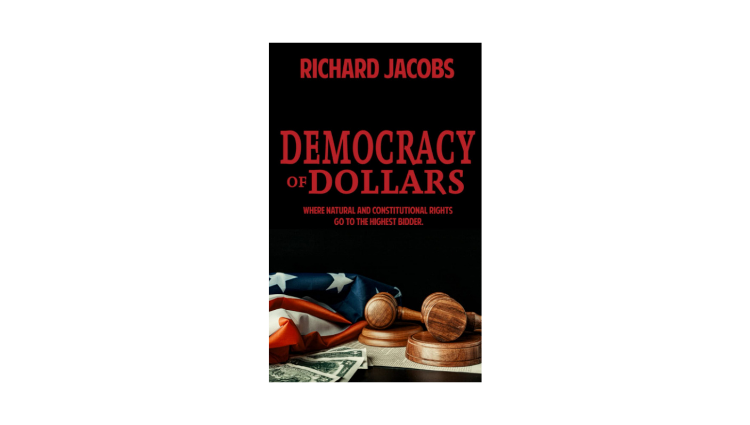 Do you want your constitutional rights controlled by the highest bidder? Or do you want an American government that puts the power in the hands of the people?

In his thought-provoking new book, Democracy of Dollars: Where Natural and Constitutional Rights Go to the Highest Bidder, Richard Jacobs exposes and examines the systemic threat to 21st Century America — a threat that, he explains, has grown exponentially in recent times and has suppressed the Democracy of People provided for in the Constitution.

“Two political institutions of our federal government, the Legislative and the Executive Branches, designed to protect and serve all Americans, have become servants to special interests who, in today’s pricy politics, have bought their way to the head of the line,” Jacobs said.

Democracy of Dollars provides a thorough examination into today’s context, in which the interplay of our three branches of government — the Legislative, Executive and Judiciary — reveal themselves as far different institutions from those in 1789.

Chapters detail the ways in which the Legislative and Executive Branches have become willing resources to special interests, with the Judicial Branch becoming their unwitting handmaiden.

Jacobs illustrates the country’s plight through examples, including:

•The Supreme Court’s deference through judge-made rules to the two political branches of government;

•The plight of voters, whose effectiveness is diluted by partisan gerrymandering;

•The effect of our Legislative Branch’s uncontrolled delegation to the Executive Branch;

•The important Ninth Amendment to our Constitution, too frequently ignored by our three branches of government; and

•The roles for our courts and for each of us.

Restoring a Democracy of People isn’t as simple as electing a new administration, Jacobs emphasizes. It requires the concerted will of all Americans, making their voices heard and demanding change.

“It’s in the renewal, strengthening and defense of democracy where you and I come in,” Jacobs said. “It’s where achieving a healthy balance between individual liberty and the common good must be achieved, and we must insist on it being accomplished.”

Motivated by the lessons learned in his travels, he devoted his attention to environmental, sea-level rise and global warming issues, as a writer, speaker and a lawyer, working particularly close with Our Children’s Trust and Stetson College of Law, where he is a member of its Hall of Fame. Democracy of Dollars grew out of his experiences in being thwarted in problem-solving environmental issues by government inaction when action is needed.

A lawyer by training, a photographer by passion, his experiences have shaped his life and understanding of the nature of our responsibilities for the care of each other and our earth, the only home we will ever have.