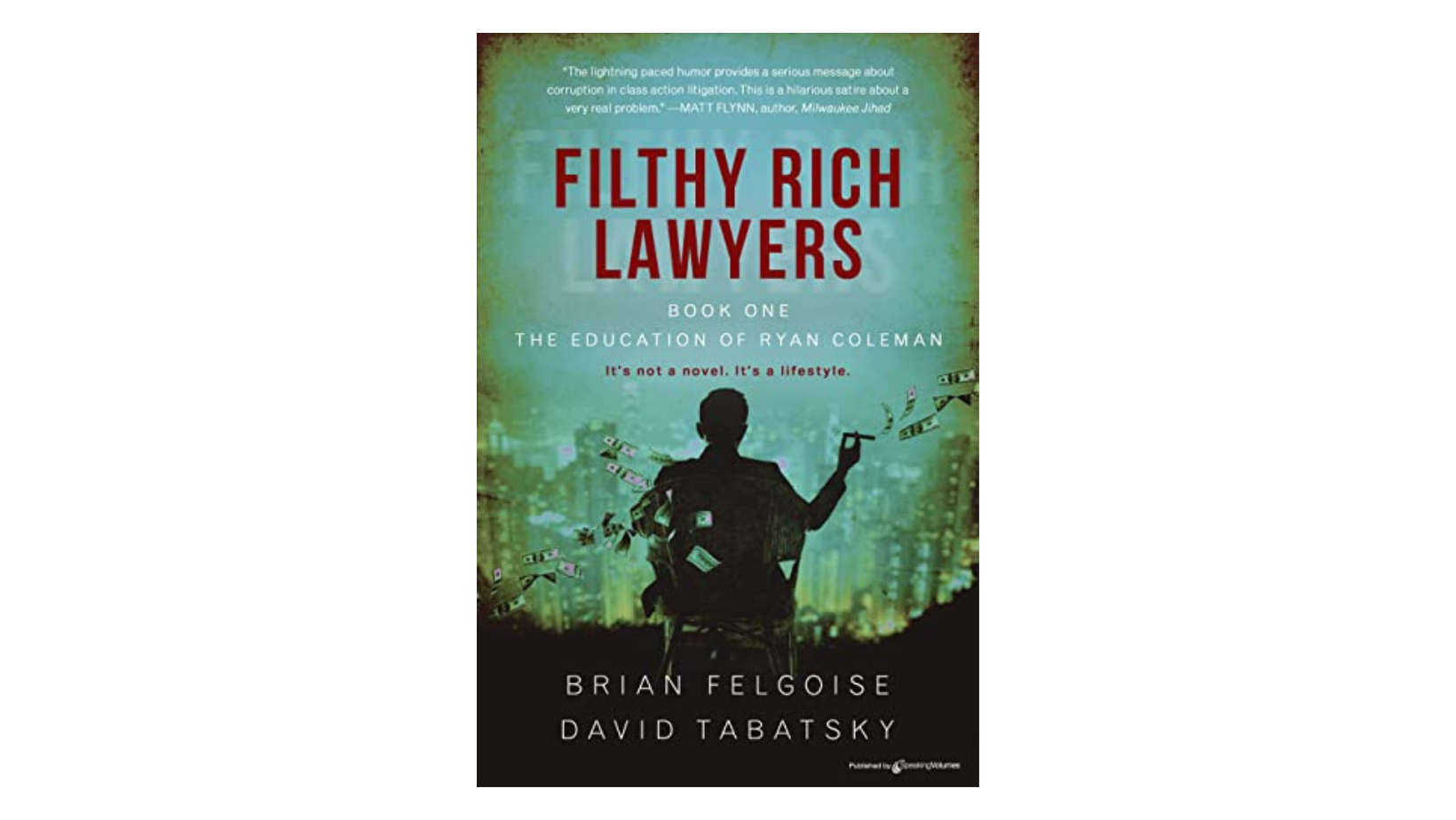 What could be more entertaining than watching hedonistic lawyers fall flat on their faces? In Filthy Rich Lawyers, Book One: The Education of Ryan Coleman, author and attorney Brian Felgoise and co-author David Tabatsky weave a satirical legal thriller filled with scenarios loosely based on real-world interactions Felgoise had with lawyers, judges and plaintiffs, with one new key ingredient: guilty pleasure at the expense of unscrupulous, filthy rich attorneys.

“I laughed out loud at the salty wise cracks on most every page,” said Matt Flynn, author of Milwaukee Jihad. “But underneath the lightning paced humor is a serious message about corruption in class action litigation. Filthy Rich Lawyers is a hilarious satire about a very real problem.”

The story begins in a Texas courtroom, where naïve young attorney Ryan Coleman is chasing his share of a class-action lawsuit involving a multi-national defense contractor. After getting reprimanded by the judge for speaking out of turn, Coleman meets Robert Smalley, a brilliant attorney and borderline criminal who boasts that, “I have the greatest practice of law in the world because I have no clients.”

Included in the cast of colorful characters is Eugenia “Gene” Cauley, a female shark in the male-dominated legal world whose life spirals tragically out of control, and Randy Hollis, an insanely successful lawyer turned multi-billionaire, who is pursuing his ultimate American dream: buying a professional football team. Coleman becomes Hollis’ “errand boy,” but as Hollis is investigated by journalists, law associations and government agents, Coleman must decide if he wants to remain in this sordid circle.

Federal prosecutor Patrick Coyle wants to take Hollis down because of an old grudge. He aligns with Dick Dickey, former Secretary of Defense and CEO of a military contractor, to ruin Hollis and Coleman. When an escort mysteriously dies in Hollis’ penthouse, Coleman becomes an unwitting accomplice and must choose between protecting his boss and saving his marriage, or telling the truth and risk going to prison.

Filthy Rich Lawyers reveals the surprising ways in which our system of class-action law enables (mostly) men to get ridiculously wealthy and behave like sophomoric frat boys.

“How they use their money and power will shock, amuse and entertain readers,” Felgoise said. “As media billionaire Mortimer Zuckerman once said, referring to some lawyer’s self-indulgence and unbridled hubris, ‘Practicing law is the exact opposite of sex. Even when it’s good, it’s bad.’”

Felgoise and Tabatsky have just completed Filthy Rich Lawyers, Book Two: In Due Time, where Coleman becomes Hollis’ prodigal son and must navigate his new life as a billionaire rainmaker as he grapples with one moral dilemma after another.

Brian M. Felgoise, Esq., is a graduate of Temple University Law School and has been practicing class-action law for more than 25 years, including cases where billions of dollars have been recovered for class members who lost a significant amount of money.

David Tabatsky has authored, co-authored and edited many novels, including The Boy Behind the Door, Friends Like These, The Marijuana Project, The Battle of Zig Zag Pass and Drunk Log. His memoir, American Misfit, was published in 2017. Tabatsky was consulting editor for Marlo Thomas and her New York Times bestseller, The Right Words at the Right Time, Volume 2. To learn more, please visit: www.tabatsky.com.

For more information about their book, visit www.filthyrichlawyers.com or order on Amazon: amzn.to/3dStArj