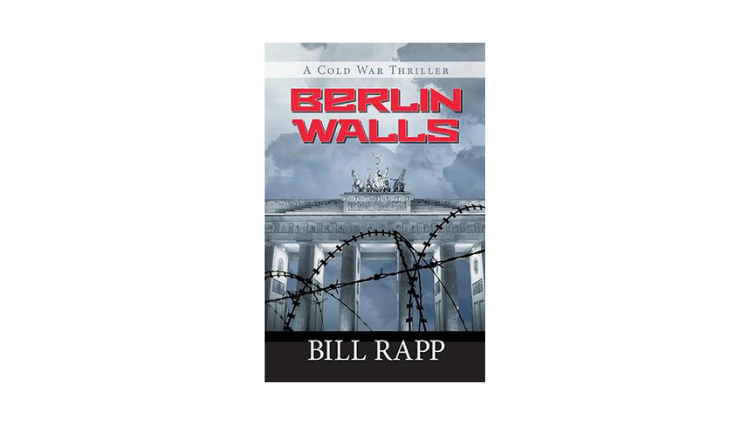 On November 9, the 32nd Anniversary of the Fall of the Berlin Wall, the Cold War Thriller Berlin Walls by Bill Rapp Will Be Published

“Throughout my adult life as an academic and intelligence professional with the Central Intelligence Agency, I have spent so much time in Berlin, Germany that the city has become almost a second home to me. In part, that is because of my own interests in German and European history and politics. But it is also because Berlin has had such a pivotal role in 20th-Century European, and world history.

It has certainly been vitally important to the United States, something that resonated in 1989 when the Berlin Wall fell, touching off the collapse of the Communist regimes in Eastern Europe and the Soviet Union.

Fortunately, I was living in Berlin at the time, on a two-year assignment at the US Mission Berlin and the US Embassy Office/Berlin and was fortunate to experience those seminal events first-hand” – Bill Rapp, Author, Berlin Walls

On November 9, the thirty-second anniversary of the memorable day that the Wall fell into the dustbin of history, Coffeetown Press will release the fourth book in author Bill Rapp’s Cold War Thriller series, Berlin Walls.

This time, the series protagonist, CIA officer Karl Baier, finds himself back in Berlin, the city in which his career as a spy began, planning and executing the defection of Sergei Chernov, a KGB officer, who has been a nemesis and sometime collaborator for Baier ever since their first encounter in 1945.

It’s August, 1961, however, and the new wall that will separate the two halves of Berlin is under construction, and the East German regime is intent on blocking the free movement throughout the city that has been the rule in the German capital since the end of the war. At the same time, Baier’s German-born wife wants him to help her parents escape from East Germany, adding even more complications and challenges to Baier’s mission. Not to be outdone, Comrade Chernov often appears to be pursuing his own agenda, raising doubts in Washington, as well as with Baier, as to the real purpose of the Russian’s defection.

Bill Rapp began his adult life as an academic historian on modern Europe but quickly decided that he needed a career that was a little less sedentary. So, he spent the next 38 years working at the Central Intelligence Agency as an analyst, diplomat, and senior executive. But he never lost his love of literature, especially mysteries and spy thrillers, and started writing fiction as an escape from the pressures of a life in intelligence around twenty years ago. In the Cold War Thriller series, Bill combines his background and experience as a historian and intelligence officer to bring an element of authenticity and insight that places the suspense of espionage in the political and policy context where it belongs. Bill also has a three-book private detective series set outside Chicago, where he grew up, as well as a thriller set against the backdrop of the fall of the Berlin Wall, an event he experienced during his assignment to the city.

Bill Rapp’s books include the mystery novels Angel in Black, A Pale Rain, Burning Altars, Berlin Breakdown, Tears of Innocence, and The Hapsburg Variation. He is a member of The Mystery Writers of America, International Thriller Writers, and The International Association of Crime Writers.