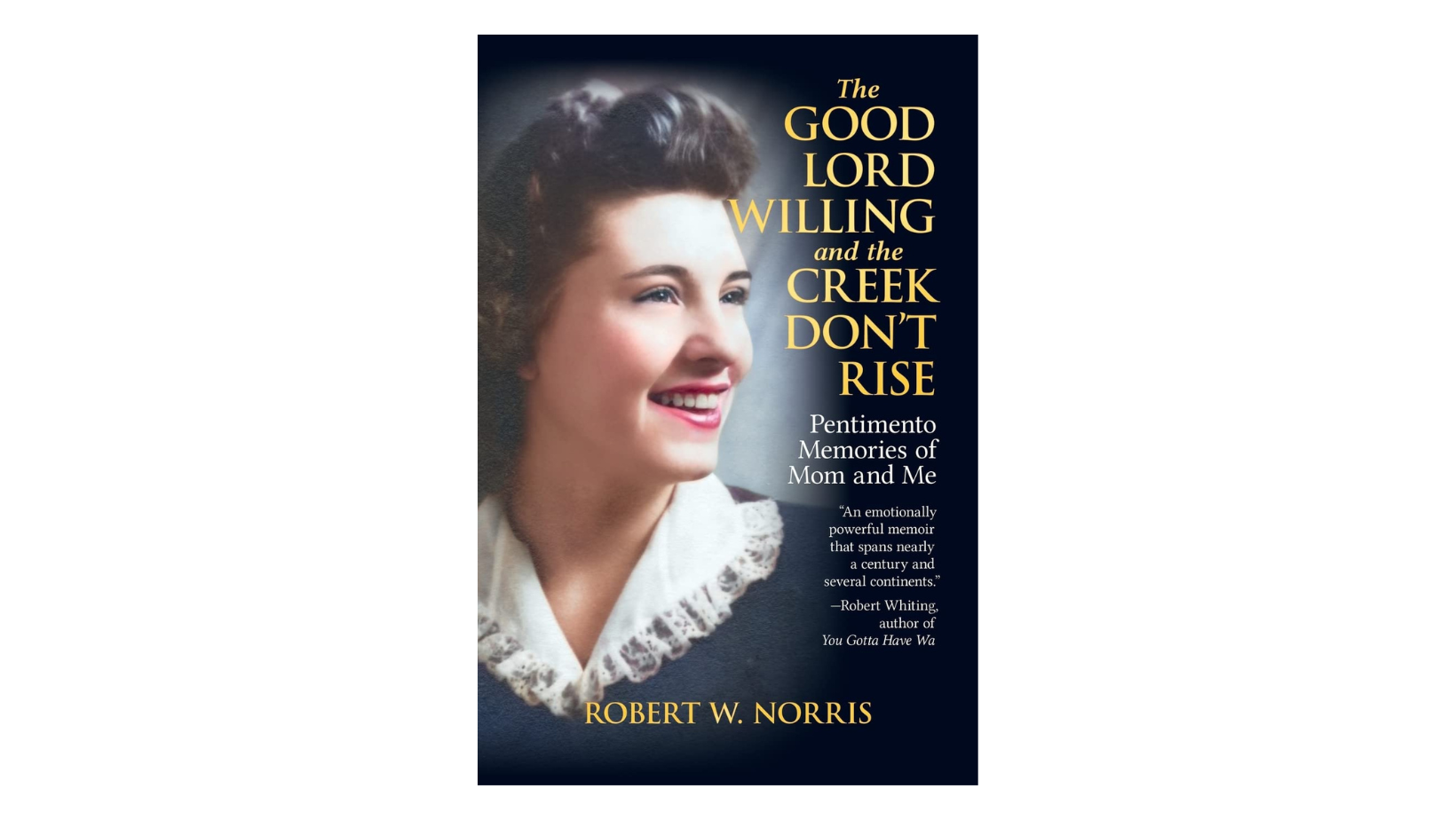 FUKUOKA, JAPAN: Robert W. Norris – a Pacific Northwest native, Vietnam War conscientious objector, and long-time resident of Japan—has announced the publication of his life story, which he calls “a tribute to my mother.”

In The Good Lord Willing and the Creek Don’t Rise: Pentimento Memories of Mom and Me, Norris explores the separate life paths that he and his mother, Kay, traveled and the bond between them that was as constant as her unconditional love. The early chapters put the reader in Kay’s shoes as she grows up in rural America during the Depression, marries young, rebels against her husband’s controlling family, battles the Catholic Church authorities, remarries, and starts anew as a legal secretary in her forties.

The book then recounts how, after an idyllic childhood, Norris goes to military prison as a conscientious objector to the Vietnam War, embraces the counterculture upon release, wanders the world in search of his identity, and eventually lands in Japan, where he finds his niche as a university professor, spends two years as the dean of students, and retires as a professor emeritus.

Norris said, “My purpose in writing this story was to try to evoke the importance of family bonds in helping us overcome difficult times and to remind people not to be afraid of the unknown. I believe it’s a good book for not only mothers and sons but also for people who’ve wondered what the road less traveled would’ve been like had they just taken that first step. I hope readers come away from it with a positive feeling.”

Advance Praise
“A most impressive achievement by a highly talented writer…an emotionally powerful memoir that spans nearly a century and several continents. Riveting and rich in detail with passages that evoke Hemingway and Maugham.… You come away from this book with gratitude to the author for having written it and respect for a life well lived.”—Robert Whiting, author of Tokyo Junkie, Tokyo Underworld, and You Gotta Have Wa

“A bumpy, coming-of-age tale set in the logging country of the Pacific Northwest, dosed with a mother’s love, transforms an alienated young man into an expat and ultimately an emeritus professor in Japan. Robert W. Norris crafts the stages of this extraordinary journey—punctuated with a turn as a Vietnam War resister—in a narrative style that is both graceful and seamless.”—Michael Uhl, author of Vietnam Awakening and The War I Survived was Vietnam

About the Author Robert W. Norris was born and raised in Humboldt County, California. He was a conscientious objector to the Vietnam War and served time in a military prison for refusing his order to fight. In his twenties, he roamed across the United States, went to Europe twice, and made one journey around the world. In 1983, he landed in Japan, where he became a professor at a private university and retired as a professor emeritus. He is the author of three novels, a novella, and several research papers on teaching. He and his wife live near Fukuoka, Japan.