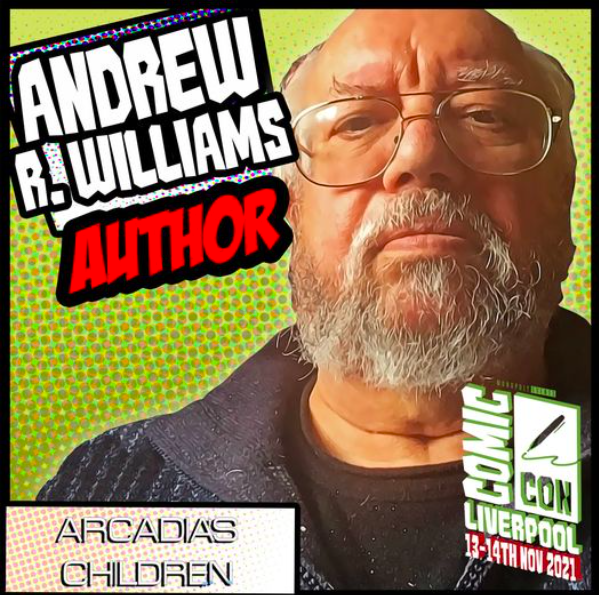 BUT… When the twilight falls & the moon rises, he gets himself prepared, snatches up his pen & that takes control!

“Arcadia’s Children” is a sci-fi thriller series that pours out of Andrew’s wonderful mind, only on the coldest & darkest of nights!

When Andrew isn’t Surveying or writing, he lives the life of an ordinary loving husband.

He loves to spend time with Geraldine, his wife, staring up at the stars, plotting the eventual World Domination!

Don’t be fooled by his calm demena. Looks are deceiving!

HELLO AUTHOR ANDREW R WILLIAMS, WELCOME TO WORLDAUTHORS.ORG! WHERE DID YOU GROW UP?
I was brought up in the north of England. Until eight, I lived in Droylsden near Manchester, then my parents move to Frodsham. At the time, Frodsham was just a small village. It is now much larger as new housing estates grew up.

TELL US YOUR LATEST NEWS?
A few weeks ago, I made the big decision to retire. I am now concentring on my writing but it is still a hobby.  The big excitement is I have been invited to Comic Com in Liverpool in November.  Hopefully, I will speak to readers there, interest them in by books and hopefully convert them to loyal fans.

WHEN AND WHY DID YOU BEGIN WRITING?
I began writing fiction following the 2005 publication of his first book, a technical tome about domestic building surveys. As technical writing was a success, I decided to write science fiction, but my first attempts ended up in the bin.(reference files on my computer)

DO YOU HAVE WRITING GOALS?
My late mother said on several occasions, “You’ll never write anything. You haven’t got an imagination.”  I hope she wasn’t right.  Five sci-fi books and a novel published, and I can feel another one coming on!

I am hoping to increase my readership by going to events like Comic Com.

My GATEWAY https://www.arwilliamsgateway.com/ Is now open

DO YOU HAVE A QR CODE?
Yes – See below. I have started putting it on all my books.

TELL US ABOUT SUPERIOR AND WHAT INSPIRED YOU TO WRITE IT?
Superior is an idea that has been at the back of my mind for some time. I then made the decision to incorporate the characters from Jim’s Revenge into the plot.

Ambronootrop was hailed as a  new wonder drug.

WhenTony Kinfrank realises the company manufacturing Ambronootrop has secret plans to create a master race, he is forced to flee for his life.

WHAT WRITERS HAVE MOST INFLUENCED YOUR LIFE MOST?
I wanted to write action science fiction adventures for a long time. The writers who have probably influence me are W E Johns  (in my younger days)  John Wyndham, Nevil Shute, H G Wells, Isaac Asimov, Dennis Wheatley, L Ron Hubbard, Valdimir Penikov and I love films like The Terminator series, Alien series and Dr Strangelove. I am trying to write in that kind of tradition.

DO YOU SEE WRITING AS A CAREER?
At the moment, I would like to a lot more writing, but it is basically a hobby.

WHO DESIGNED THE COVERS?
The cover for Superior was designed by Liam Ryan liam@akomcreative.co.uk

WHAT WAS THE HARDEST PART OF WRITING YOUR BOOK?
At the moment, I am being diverted from word processing time by having to complete outstanding surveying business.