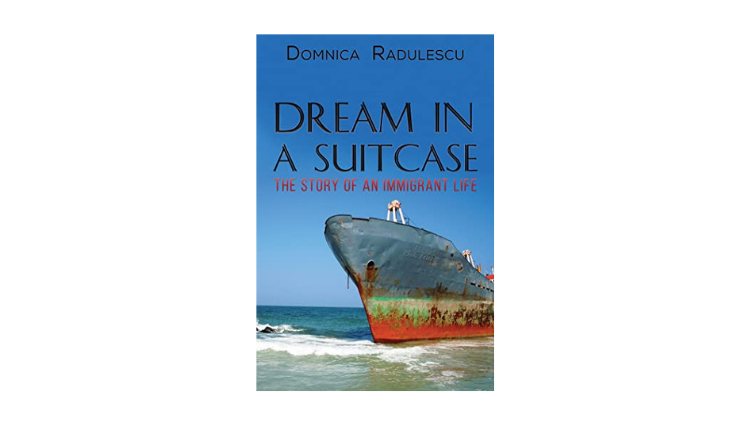 Dream in a Suitcase from Domnica Radulescu is a fast-paced, true story of survival, resilience and the power of love, told from the perspective of a female Romanian-American survivor of the worst communist dictatorship behind the former Iron Curtain.

The story opens against the backdrop of 1983 Bucharest. The food lines are interminable, the secret police are omnipresent, and college student Domnica Radulescu is reluctantly preparing for a daring journey that will take her first to Rome, and eventually, the United States.

Chapters trace the defining moments in Radulescu’s life, beginning with her traumatic escape to Italy in 1983; back to several pivotal events in the heroine’s early childhood and adolescence in her native Romania; her arrival and first years as a fresh political refugee trying to adjust and survive in Chicago; and the saga of her resettlement in a small Southern town as a single working mother. Along the way, readers are introduced to a whirlwind of lovers, accompany Radulescu on a myriad of travel adventures and witness the creation of her art as she is endlessly inspired by everything life throws at her. Dream in a Suitcase is a roller coaster of geographies, languages and cultures that also ventures into less traveled territory, as Radulescu grapples with topics such as abortion, single motherhood and negotiating the obstacle course of the American academic world.

With uncompromising irony, self-deprecating humor and unapologetic feminist rebelliousness that calls to mind Sylvia Plath’s The Bell Jar, Dream in a Suitcase is a powerful memoir that immerses readers in the mind of a woman who makes the bold but heartbreaking decision to leave behind her family and country to pursue the illusory American Dream.

About the Author
Domnica Radulescu is an American writer of Romanian origin. After settling in Chicago, she obtained a master’s degree in Comparative Literature and a Ph.D. in Romance Languages from the University of Chicago. She is the Edwin A. Morris Professor of Comparative Literature at Washington and Lee University. Radulescu received the 2011 Outstanding Faculty Award from the State Council of Higher Education for Virginia and is twice a Fulbright scholar.

She is the author of three critically acclaimed novels: Train to Trieste (Knopf 2008 and 2009), Black Sea Twilight (Transworld 2011 & 2012) and Country of Red Azaleas (Hachette 2016); and of award-winning plays. Train to Trieste was published in 13 languages and won the 2009 Library of Virginia Best Fiction Award.

Radulescu has also published 12 nonfiction books, edited and co-edited collections on topics ranging from the tragic heroine in western literature to feminist comedy, to studies of exile literature to theater of war and exile, refugee art, and two collections of original plays.

The 4 Life-Changing Books by the 4BiddenKnowledge Network

Out of The Box – We Can Save Our  Planet!