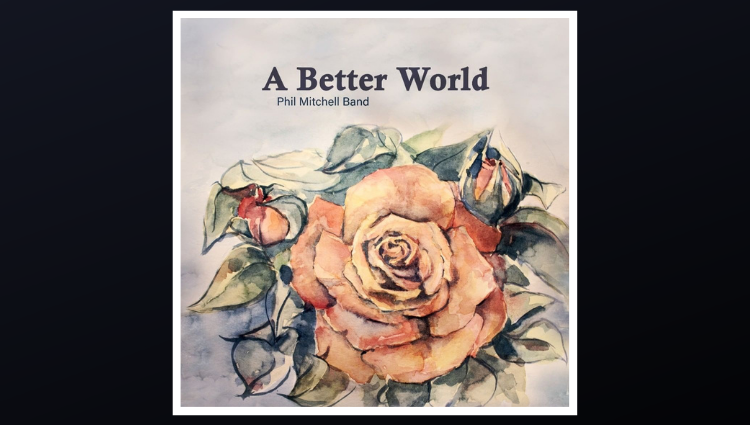 The Phil Mitchell Band is a rock band out of Chicago. “A Better World” is their 4th album. It features some fine singers and guitar. Phil has written everything many songs in different genre: rock, jazz, blues, classical, EDM, country, gospel, and pop music. The new album has some new sounds.

Hello Phil, What led you to become a songwriter?
I wanted to make the world a better place. My dad was a history teacher and he said that things in life always kind of repeat over time. Dynasties are created and they fall apart over time, there are many causes but it is usually about money. My dad said, “How wonderful it would be that things stayed the same.” The discussion got me thinking about life and hoped to make things a better place to leave behind.

How has your songwriting evolved over time?
I started out writing classical music and I got interested in ragtime. I thought Scott Joplin was the best piano player in the world because his songs were not so easy to play. It inspired me to become a better piano player and as I was writing music I tried to incorporate that into my songs. It helped me to develop a melody line in addition to just rhythms.

How do you see your music touching people today?
Interesting, the process of writing music for most people has become mechanical because there are some great computer programs out there. I don’t think we should forget about the live process of creation. Many people look at a song just for 90 seconds. Does that help someone to appreciate a nine movement symphony? Too many people want to create something that resembles what is out there instead of creating something new and different.
There is a bad need for true composers today.

What was your most challenging song?
“Never Let it Die” was my hardest song to write. I spent years on it and I couldn’t find the write sound I was looking for. It took a great guitar player like Alvaro Soto to finally help me to reach that final stage. The guitar solos are amazing and really reflect my struggle of the songwriting. In the end, it finally got done.  When I told Alvaro, that we have an Irish saying that “If it doesn’t require a lot of struggle, it ain’t worthwhile”. There is some truth behind that.

How is the album coming along?
Well we released it in October. I started writing an album about my life and it turned into something so much more. Maybe, I had a better life than I thought.  I got left behind at the “Crossroads” album. Where do I go from here. I was kind of at a standstill. Then, I thought….well maybe I should just write something about how I feel right now. It started to take off and I ended up at a better place. All these things we see in the album are things you would encounter in seeking a better world. I just didn’t want to be left behind at the crossroads.

What has been people’s reaction?
A lot more than I thought. Phil, you really created something that people need right now. I didn’t think of that….I mean….I was just trying to leave the Crossroads man. I am happy for all the response………but I give credit to where it belongs. I create things and these skills just evolved over time.  They are just a gift.

How do you want people to remember this album?
I hope they would find something different than the regular mainstream to listen to. I hope that they realize……it might take some time before we get a better world but there are some people out there that are really trying. I am thankful for that.

The Importance of Diaphragmatic Breathing to Decrease Anxiety