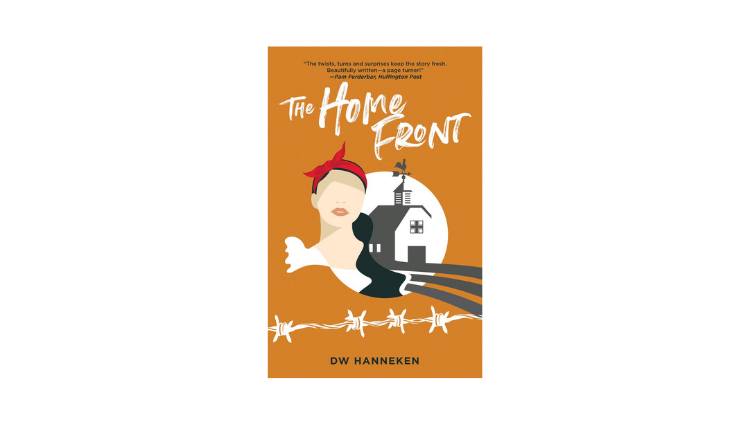 Talented storyteller DW Hanneken, who has gone on to win national and international awards for his past work, delves into the 1940s in his latest novel, The Home Front. Hanneken was first inspired to write The Home Front after being influenced by his mother who worked in a German POW (Prisoner of War) camp during World War II.

Describing the scene, Hanneken explains, “Only her stalag was not in Belgium, France or Germany, it was actually located just outside Rockford, Illinois, and was one of hundreds of German POW camps located in America during WWII. Over the years, my mother humanized a group of people we all think had horns on their heads and pitchforks in their hands. She marveled at how young they were, and how they wore expressions of relief to be out of the fighting. They seemed grateful to be safe and appreciated how they were treated by the American guards. Even as a child, I knew this would be the perfect backdrop for a piece of historical fiction.” Shedding light on the events that took place during World War II in America, Henneken is hopeful that The Home Front can remind us all that we need to love and care for one another as human beings, especially during a time when hate and conflict remain present in current events.

The novel follows the powerful story of American farmer Maggie Wentworth and her relationship with German POW Adam. “I grew up in a house with five women, so to me Maggie is a bit of an amalgamation of all five of them. She’s one part empath, one part peacemaker, perhaps a little naive at times but through it all she’s incredibly strong,” Hanneken described. Encompassing numerous lessons of World War II, Hanneken hopes that readers will feel empathy, joy, surprise, and even laughter while reading the novel.

As someone who has always had a passion for writing, Hanneken recounts, “I’ve always liked to tell stories, and find great happiness when I can share a good story verbally or in the written word.  What’s more, I am a student of culture, and for as long as I can remember I’ve loved to “people watch,” whether it’s in the airport, sitting on a park bench, watching folks move about on a busy street in the Chicago Loop, or picking people out of a crowd at a sporting event or in a grocery store – I enjoy trying to decipher not only what their lives are like, but I like to watch how they interact with each other, and even try to predict what sort of mood they are in. All of those characteristics and behaviors find their way into my stories.”

The Home Front encompasses the true grit and daily routine of Americans during World War II. Readers are transported to the historical events that transpired during this intense era. A common question that readers may stumble upon is as to why German prisoners of war were in America during this time period. Hanneken explains, “Winston Churchill was running out of places to put the captured German soldiers, and Franklin Roosevelt needed to fill labor shortages on farms, in canneries, lumber yards and on road crews. In the early 1940s, American supply ships often returned from Europe empty, so the U.S. took the Germans back on their return voyage. It was a true win-win for both sides.”

Wanting to ensure complete historical accuracy, Hanneken encountered difficulties while composing and researching historical events for the novel. Hanneken described his biggest challenge as “finding proper data pertaining to German POWs in America, as the US military destroyed most of the records about these “tent cities” in order to minimize any hostilities they may have received from servicemen who returned from the war. I eventually found what I needed in several books and in newspaper articles that are just now bringing this piece of whispered history to light.”

Hanneken was also able to use his own father and mother as primary sources in order to gain more insight on farming during the 1940s. His father shared many stories during his time growing up on a farm between 1925-1945 and his mother was also able to provide ample information on life in the POW camp as well as female friendships and relationships with their spouses during this time period.

To read Homefront for yourself, purchase the book here: https://dwhanneken.com/

What is Creative Writing?

Amish’s War of Lanka is a masterpiece of epic fiction