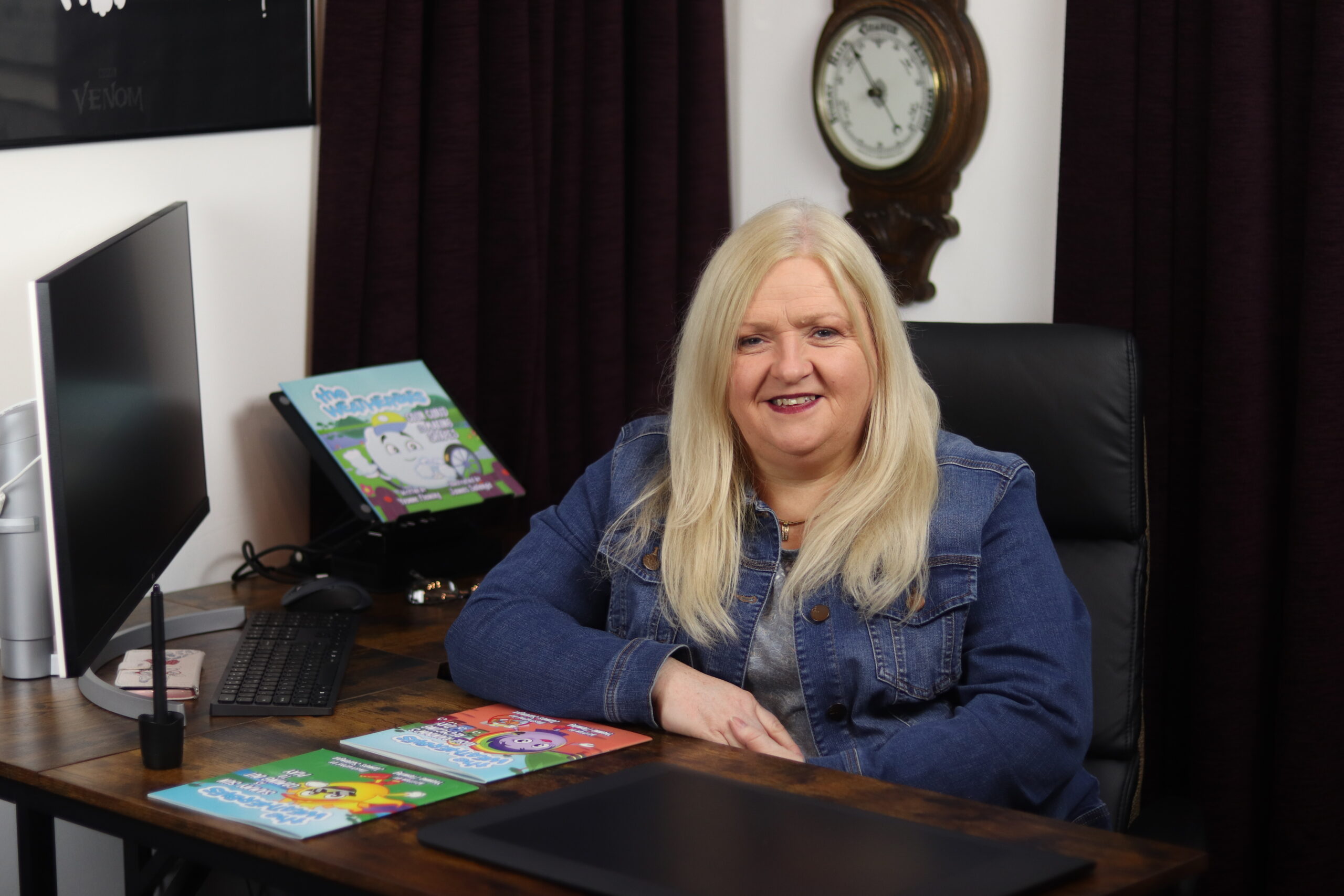 When Northern Ireland mum, Yvonne Fleming, began to tell her two children night-time tales, little did she know that she would end up with a series of books, animations and a potential TV deal all based on her Weatherbies characters.

Yvonne was encouraged to make her idea of the Weatherbies characters into a career after her husband Peter overheard the stories.

“He was walking past the bedroom door and heard me telling the story,” Yvonne explained.

“He listened for a while and then when I came downstairs, he said he thought it had potential. His background is in the music industry, for years he has been writing and creating music.

“I started writing stories and songs, and then Peter would write and record the music for them.

“I’d have been putting my kids to bed and would have read them a story,” she said.

“If I was tired, I would have made up my own stories about The Weatherbies.”

“They kept asking me for these stories and I couldn’t remember what I’d said two nights back, so I thought I’d better start writing them down.”

Now her children are grown up she still runs ideas past them, but she is also dealing with publishing deals and working with Peter Rabbit script writer, Jodi Reynolds, as well as UK production company, Threewise, with the potential to have a 52-week series of Weatherbies TV programmes.

The first time she read her stories beyond the walls of her home was to a very special focus group.

“The very first time I went into a school was my wee boy’s P1 class about 12 years ago,” Yvonne said.

“They had invited the parents in to read a book. I had said to the teacher what book am I going to read, and she told me to read my own.

“I went in thinking I was going to be in the school fifteen minutes or so. I was in that P1 class for two hours and then it was lunchtime.

“The other P1 teacher came in and said, ‘you do know you’re coming into me after lunch’. I was in the school nearly a whole day talking to the kids and reading some of my stories without a lot of artwork and they all loved it.”

“Children are like sponges and sometimes people underestimate the knowledge a child has and their ability to retain information and understand it better than some adults,” she explained.

“There have always been environment issues, but it is now at a stage where it can no longer be ignored and needs to be addressed.

All the Weatherbies stories are based around a group of weather-themed characters who live in Skytown including Sammy Sun, Rosie Rainbow, Colin Cloud, Flo Snow, Ronny Rain, Willy Wind and many more. As well as being a fun set of stories, there is also learning for the target age range within Key Stage One and timely environmental messages.

“For me it has always been very important, and I’ve always taught my kids the importance of recycling and not wasting electricity – teaching them to do their bit. If kids are more aware of how their actions can affect the environment, they can adopt a more sustainable lifestyle at an early age”

As well as the environmental messages, the Weatherbies also help children learn about the different forms of weather and their characteristics and roles.

“Our Colin Cloud Is Making Shapes book is a fun story about the cloud changing shapes but also educates children about the water cycle,” said Yvonne.

“It helps the kids to understand the importance the water cycle has in keeping the plants and forests alive.”

“The eco-friendly community of Skytown all do their bit in sustaining the environment. They do this by using renewable energy sources such as solar and wind power, while also recycling their rubbish.”

Yvonne believes that no matter the age of children they can take on board the positive messages from the Weatherbies.

With the help of her husband, songs have been developed to accompany the books, although Yvonne confesses that she had to get a singer to record them as she isn’t a great singer herself.

Yvonne has been determined to see her books grow and flourish into other media such as animations and online content, looking back at how far the Weatherbies has come since the first self-published book “Sammy Sun Is Coming Out To Play” motivates Yvonne to keep moving forward on her Weatherbies journey.

“We self-published that as our first book,” she said, adding: “it did well and then six months later we published Rosie Rainbow’s Recycling Day and we got a good response.

“We went to the London Book Fair, where we met Tiny Tree Children’s Books and they published our third book – Colin Cloud Is Making Shapes.

“We’re also exploring animation. We have developed an animation pilot with Flickerpix Animation Studios, which has led us to work with Michael Ford

“He sent my work out to five or six writers to see if they were interested, ” she said.

“Jodie Reynolds had come back and said she thought it was a phenomenal, very strong concept.

“She said sometimes you get things sent to you and you read them and you don’t see a lot of potential – maybe one movie or maybe one series and nothing else. But she said The Weatherbies had it all. She was very excited about it and wanted me to know how strongly she felt about the project and how much she would love to work with me on it.

“I was blown away by this because you always second guess your work. So, for someone with her track record in the industry to see the potential and want to put her name to it was just amazing for me.”

Yvonne is currently working with Jodi developing scripts and creating the character and story ‘Bible’ for the series, while also working with her illustrator, James Salenga on a new Weatherbies book “Sing a Song With the Weatherbies”. However, Yvonne always keeps in mind who her audience is.

“Children are very blunt. If they like something they’ll tell you, but if they don’t like it, they’ll also tell you. I feel relieved that none of the kids have actually said they don’t enjoy it. I think it must be okay if I’m still pleasing the audience.”

To purchase the book and listen to the songs go to theweatherbies.co.uk
Listen To The Weatherbies on Apple Music and Spotify