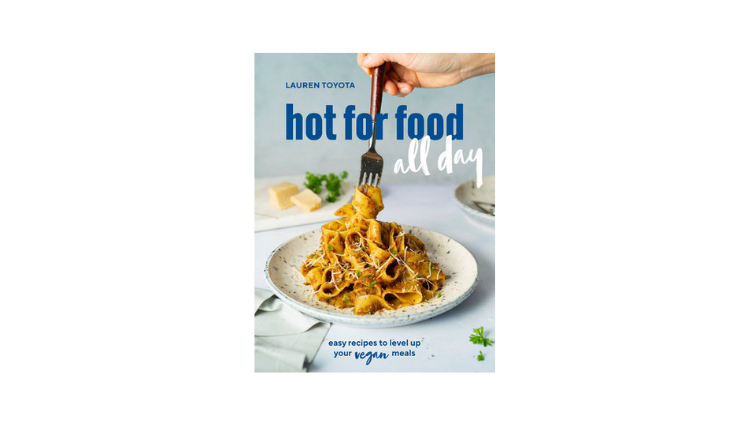 Toronto, ON — North America’s favourite vegan cookbook author and content creator Lauren Toyota has done it again with the release of her second collection of recipes — hot for food all day. Delivering more than 120 recipes for mouth-watering meals to try, hot for food all day has been celebrated as a #1 Amazon.ca bestseller, recognized as both a Canadian and international bestseller and has been the focus of media outlets across North America since its release on March 16.

With the goal of making vegan cooking approachable and undeniably delicious, hot for food all day is the perfect companion piece for Toyota’s first best seller, Vegan Comfort Classics.  Teaching at-home chefs how to level up their vegan meals, the book has garnered press from some of North America’s most respected news outlets — Refinery 29, VegOut LA, Chatelaine and ELLE Canada. Toyota has also appeared on numerous broadcasts including Good Morning Washington, CityLine, The Marilyn Denis Show and Your Morning (CTV) in support of the book’s release.

Tune in tomorrow as Lauren features one of hot for food all day’s most popular recipes on The Morning Show (Global). Then join Toyota for the final virtual gathering of the book tour — a National Indie Event Series — with Mississippi Vegan’s Timothy Pakron and host Pay Chen. Tickets available HERE.

hot for food all day: easy recipes to level up your vegan meals is available where all books are sold.

Lauren has made a name for herself as an inspirational, influential voice of a generation. With armies of social audiences, Lauren is now living the dream as her very own modern day media outlet having seamlessly transitioned from close to 10 years as a national television host to independent, self-made content producer. She is an authentic and engaging content creator and best-selling author (Vegan Comfort Classics: 101 Recipes to Feed Your Face) who is currently working on her second cookbook — hot for food all day — which was released on March 16, 2021, immediately becoming an international bestseller.

About hot for food

hot for food now boasts over 466,000 subscribers and over 36 million channel views since launching in February of 2015. The debut, best-selling cookbook, Vegan Comfort Classics: 101 Recipes To Feed Your Face (Ten Speed Press/Penguin Canada), was the #1 selling cookbook in America according to Nielsen BookScan the week of release,  a Publisher’s Weekly bestseller, ranked in the Top 100 overall books on Amazon.com and #4 on the Globe and Mail Best Sellers List in Canada (it also ranked twice more at #3 the weeks following). It was also voted best cookbook in the 2018 Veggie Awards (VegNews Magazine), made the New York Times’s Summer Reading List, and was an Amazon Best of the Month pick and continues to be an Amazon best seller. Lauren Toyota is currently working on a second cookbook — hot for food all day — which was released on March 16, 2021 via Ten Speed Press/Penguin Canada and immediately becoming an international bestseller.

KEEP UP WITH LAUREN TOYOTA