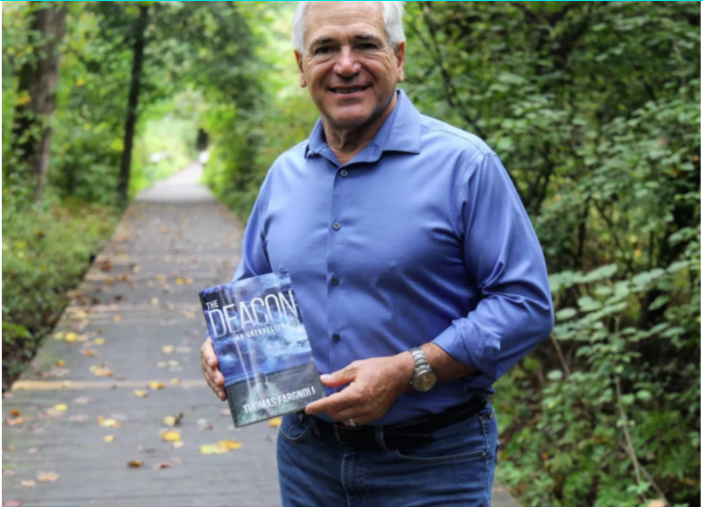 Tom Fargnoli is a truly inspirational person. He has endured many hardships and has come out the other side stronger than ever. After his wife of 40 years committed suicide he had to make some very difficult decisions on how to proceed with his life. At the time of his wife’s death, he was a deacon of a catholic church, and to his dismay would not be able to continue his deaconship and have the opportunity to find new love. His book, “The Deacon: An Unexpected Life” takes you through Tom’s journey and offers others going through the same thing a light at the end of the tunnel.

Currently, Tom and his new wife Dorothy live in Clarksboro, New Jersey. He has a background in engineering, retail, banking, and finance. Now, Tom is has turned his attention to writing. He hopes to connect with his readers and send a message of comfort and love for anyone going through unexpected life experiences. Read our exclusive interview with Tom below.

“The Deacon: An Unexpected Life” is about the tragic loss of your wife to suicide, how you coped and having to choose between your life as a deacon or finding love again. How did you ultimately make such a difficult decision?
This decision was certainly not easy. In fact, it was more of a battle than a decision – a battle of the heart. Blaise Pascal once wrote when facing a difficult decision, choose the path that has heart. But, in this case, both paths had heart – they were both paths of love. I loved being a deacon – all aspects of it, from visiting patients in the hospital to performing baptisms, to funerals, and to Sunday homilies. It was how I had planned to spend my retirement. I loved it all!

But I also felt I had so much love in my heart to share with another.  I desperately wanted the opportunity to pursue another loving relationship that could lead to marriage. I mean, that’s all I ever knew, having been married for 40 years! The Church made it clear, however – I could not do both! Thus, the battle – a battle that made grieving that much more complex – a battle that went on for almost 2 years and eventually landed me in the hospital for open-heart surgery. It was in my recuperation of that surgery that I experienced true loneliness and through much prayer, the path became clear for me.

How long after your wife died did you begin writing this book? What was that process like?
First, keep in mind that I really had a perfect life – a wife, home, children, grandchildren, health, retirement, and an amazing ministry. But then, unimaginable tragedy and horror came to my family in the form of suicide. Grieving the loss of a spouse is devastating but as I quickly learned, grieving is much more complex when it involves losing your loved one to suicide. Whenever the “S” word is mentioned, people just shut down. They don’t know what to say or do, they avoid you. In a way, I felt shunned. When I needed people the most, they were not there. That’s why I say the grieving was more complex.

In addition, once I made my decision to leave the diaconate, I felt rejection – rejection from the Church, from some priests, even from some of my brother deacons. I was treated as if I left the Church, not just the diaconate. I felt like I had leprosy – a feeling of being shunned again! The first from the nature of being a suicide survivor, and now, by making my decision to leave the diaconate – a decision by the way that I thought and prayed on for two years.
Suicide, Decision, and Rejection! Through all of this, my psychologist kept telling me to write things down, so I did! I wrote about my grieving, about suicide, about the decision, about the rejection, about all of these unexpected events. So what began as a cathartic process, thanks to the Holy Spirit, has turned into my book, over four years after my wife died.

How did you deal with the emotional impact of the book (on yourself) as you were writing the story?
As mentioned, my psychologist suggested that I write things down. As I did, it was very cathartic in that my writing was an open expression of rather strong emotions. Emotions involving my ministry and the bonds created with my brother deacons as we progressed through almost six years of formation, emotions as I wrote about what it was like to be ordained and to serve as a deacon, emotions as my wife became depressed and how she progressed to the horror of suicide, emotions related to my decision, and emotions related to the rejection I felt.

It was indeed difficult to relive all of these things. It caused me to cry like a baby all over again. As I started to assemble the chapters of the book, my goal was to make sure my story moved the reader in the way it moved me. In other words, I wanted the reader to feel my pain, my loneliness, my turmoil, and to relate to it. But I also wanted the reader to experience my faith and my hope and to help them see glimmers of faith and hope despite what they may be going through in their lives.

It is important to focus on those glimmers of light and together with faith, you can journey from the darkness to the light. In my book, I leave the pain and loneliness behind as I journey with God to find peace and light. In so doing, I find love again and do in fact marry again. My wife, Dorothy, also lost her spouse tragically and suddenly. We are both convinced that God, as well as our late spouses, brought us together.

Can you tell us about the process of coming up with the cover?
My current wife, Dorothy, who after reading a draft of the book told me that people will be helped by my story. My intent became just that – In sharing all my unexpected and unfortunate events, and still managing to keep my faith, I hoped to inspire others, amidst their chaos and pain, to find glimmers of hope, faith, love, and peace.

The more I visualized that intent, I kept seeing rays of sunlight finding their way through clouds. Just about everyone has clouds in their life and honestly, we all end up living an unexpected life. Despite the clouds, no matter how thick they may be, we just need one glimmer of hope to hold onto.

The photographer at our wedding took a lot of nature photographs as well as cloud photographs. As I was looking at his photographs on his website, and thinking about the intent of my book, I came across the perfect picture. I believe that, just as my book came together for a reason, that picture was meant to be my cover.

All of the proceeds to your book are going to suicide prevention and awareness. Do you have any specific charities in mind?
I like “SAVE” – Suicide Awareness Voices of Education. They offer a variety of services from suicide prevention resources to helping suicide survivors, the ones left behind. Their services include public awareness, education, training and consulting, grief support, and a variety of products and resources backed by research and innovation.

Do you have any advice for readers that may have lost a loved one to suicide?
First – It’s important to understand that suicide varies tremendously – people should never assume that they know the reason why someone took their own life. Often, it is not a rational decision.

One thing is certain – The person who committed suicide was consumed with emotional pain that became unbearable. They feel hopeless and helpless. Most times, they don’t want to die, but it’s the only way they feel their pain will end.

As I mentioned, the grief process is more difficult in the case of suicide. Many people may believe that those who died by suicide are weak, that they committed a great sin, or that they could have avoided suicide if they had faced their problems.

Many people blame suicidal persons and even their families and friends for an act over which they had no control – they may even shun the family of the deceased.

My advice is to talk to those who have lost a loved one to suicide, not about the event or even about the circumstances that led them to the event but talk about the pleasant memories you have of that person. That person was and is more than a person who committed suicide!

Can you share something your readers wouldn’t know about you?
I am a magician! I have been doing magic for over forty years. It all started when I saw a man make a lit cigarette disappear close-up in front of my eyes! In addition to doing magic shows for children and adults, I have used magic to provide emotional content to various subjects that I teach – such as computers, software, and systems engineering, and even to emphasize and clarify sacred scripture.

For example, using ropes, I demonstrate a Trinitarian view of God – the Father, Son, and Holy Spirit. I also demonstrate how God is a forgiving God as I cut and restore a length of rope. Using doves, I show how the Holy Spirit appears from nowhere. On my website, I have started to include some video clips of me performing some of my favorite magic effects.

Where can readers learn more about your story?
My book, “The Deacon – An Unexpected Life”, is available on Amazon and Barns & Noble.

Readers can learn more about me and my book on my website: www.ThomasFargnoli.com. In addition, readers can email me at tom-magic@comcast.net