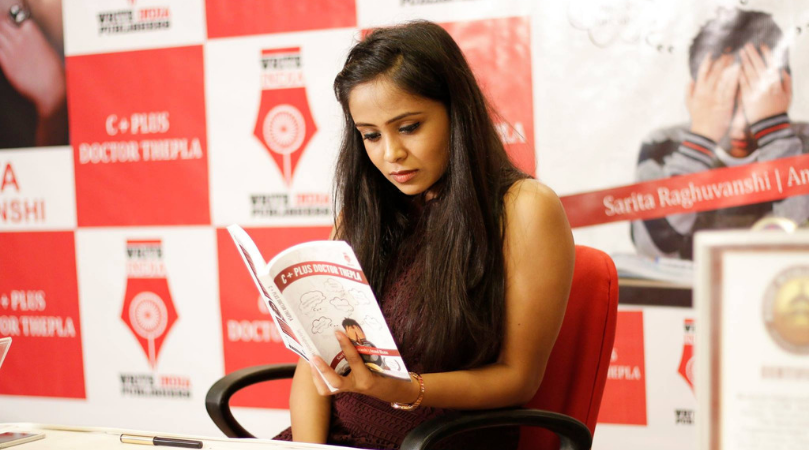 Sarita Raghuvanshi is an Indian Master of Ceremonies (MC/Anchor), an Image Consultant and Author. She has anchored 1000+ events in 20+ countries since 2007 for brands like Mercedes-Benz, Honda, Infosys, Volvo, Asian Paints, Tech Mahindra etc.

She has authored the novel “C + Plus Doctor Thepla”. It was released in September 2016 at Ahmedabad, India by their Mayor Mr. Gautam Shah. It is a fictional book in the English language that intends to promote and boost the start-up culture of India. A video, highlighting the storyline of the novel, starring a puppet, was officially released on YouTube in June 2016. By this, the novel created a record of being the first Indian novel with a puppet promotional video and was given the record certificate award by the Limca Book of Records. In February 2017, she pursued her Image Consultancy course from the Academy of Image Mastery, Singapore and became India’s youngest Image Consultant.

What was the motivation to write the novel? Also, tell us about the Limca Record it has created.
When I decided to take up anchoring as a full-time career, my family and society wasn’t comfortable with it. However, I was adamant and knew that once I will make it, everyone will support me. I could take this daring step, but not everyone in our country can go against the “Log Kya Kahenge” pressure. I know of friends who were brilliant artists in college but now are doing unwilling corporate jobs. I always wanted to do something which ensured that the ‘puppet’ in all of us does not succumb to societal pressures. This book makes you live the struggles of an average Indian student while pursuing his start-up dream and how he goes against the ‘Manjoo Mausi’ of our neighbourhood. To make the point effective, a ‘puppet’ video was made (watch at https://www.youtube.com/watch?v=TsxB_WLNqAk) and released on YouTube. It created a buzz over the internet. The Limca Book of Records recognized it as the ‘First Novel with a Puppet Promotional Video’ and appreciated its mission.

You have anchored so many events and we are excited to know a bit more about it. Can you tell us the most memorable event of all of these?
For me, every event is memorable for I get to meet new people, learn about different companies and moreover, improve my skills. However, one event is special to me and that was in 2016. I had got the opportunity to host an event for the United Nations. It was the first time that the UN had selected an Indian to host their global event. This was thrilling and memorable:) It was the GEM-TECH Awards 2016 at Bangkok, Thailand, organized by the United Nations Women. The event saw the presence of many distinguished personalities including Tupouto’a’ Ulukalala, the Crown Prince of Tonga, Mr. Houlin Zhao, ITU Secretary-General and other dignitaries from the UN and IT Moguls. In this event, the UN felicitated women from various parts of the globe for their outstanding contribution to the female gender upliftment. From the unknown parts of Africa to the metro cities of the western world, there were inspiring women from everywhere who had done a lot for the society. While knowing more about them during the event, I weeped at once and thanked God for blessing me for all that he has given. This event made me realize that we should be thankful for what we have, and always help out the needy around us, at the least!

So you are the youngest Image Consultant of India. Brilliant! How did you get into it?
Of the many ‘must-do’ things on my list, this was on my top priority. I wanted to become an Image Consultant and take ahead my passion of image branding and people development. I believe that this field is unexplored in our country. While first impression may not be the last one, it certainly is a lasting one. Hence, I feel things will change with time and I hope I can contribute to this change in its primitive days. I pursued my Image Consultancy course from the prestigious Academy of Image Mastery, Singapore.

What has been your biggest inspiration?
Oprah Winfrey! Since a young age, she faced a lot of hardships but never gave up. Sexually abused at 9; ran away from home at 13; pregnant at 14; Beauty queen at 17; abused drugs in her 20s; first black American woman on National T.V. in America and Millionaire at 32. Says it all?

Finally, what advice do you have for aspiring authors?
As Oprah Winfrey says “The biggest adventure you can ever take is to live the life of your dreams”. I think I have started living it, you too should 🙂