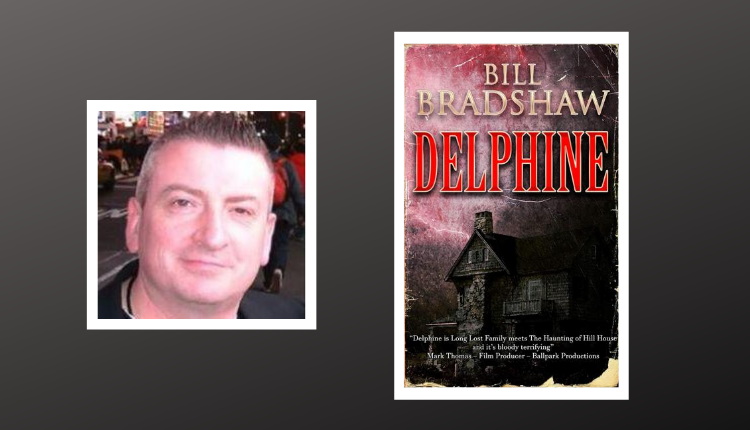 Bill Bradshaw wrote the novels ‘From the Horse’s Mouth – A Jailers Tale in 2005 and, more recently, Hello Welcome which won Book of the Month and Book of the Year awards in 2017. In 2015, he wrote, produced and directed the multi-award-winning short film The Long Night Followed.  His current book, Delphine, has already garnished several awards including Book of the Month, and it is competing in two categories for the An Post Irish Book of the Year Awards 2020. Bill lives in Lisdoonvarna on the west coast of Ireland where he drinks spiced rum and scribbles.

I WILL BEGIN BY SAYING THAT DELPHINE IS A GREAT READ. IT IS AS ENGAGING AS IT IS HORRIFIC, BUT THE BOOK EXUDES A SADNESS THAT IS STUNNINGLY BEAUTIFUL AT TIMES. WHERE DID THE STORY COME FROM?
The origins came from a nightmare and the scene with the child looking for the fuse-board came directly from that. Growing up in the west of Ireland, I had always known people who were searching for their roots and I often wondered what happened when those searches went horribly wrong. I built a back-story and weaved all those strands together.

EDWARD BRADY RANKS ALONGSIDE LECTER AND PAZUZU AS ONE OF THE MOST UNSETTLING VILLAINS EVER TO STAIN A PAGE. IS HE A SYMBOL FOR THE PTSD OF VETERANS OR IS HE AN ACTUAL REPRESENTATION OF PURE EVIL?
I worked as a Prison Officer for many years and I knew officers who had suffered PTSD. It is like sitting on a self-destruct button so I can only imagine what it was like for those young soldiers out in the trenches. In my time as an officer, I met thousands of inmates. Some had made mistakes, others were thugs, a few were more than that but in all those years I believe I met an Edward Brady 3 or 4 times.

WHAT WAS THAT LIKE?
There’s a scene in Jaws where Robert Shaw’s character, Quint, is talking about the sharks that attacked after the sinking of The Indianapolis and he refers to their ‘dead eyes’. I knew what that meant after working in the jails. The men that made Edward Brady had dead eyes, absolutely soulless, and it was the first thing that stuck you when you met them. Then you learned what they did, and your heart went out to their victims.

SPEAKING OF FILM, DELPHINE IS WONDERFULLY CINEMATIC, AND I COULD SEE IT VERY CLEARLY. WOULD YOU CONSIDER A SCREENPLAY?
The screenplay is already completed and has won several awards on the International Film Festival circuit. I picked up the Best Feature Screenplay Awards in Tokyo and Estonia along with a Fear of the Year Award in Toronto. The script was voted 4th of the top 10 horror scripts of 2019. I have also drafted a TV series with 6 episodes if there is a Netflix producer who has time for a coffee.

I UNDERSTAND THAT DELPHINE IS THE DEBUT NOVEL OF MAESTER PRESS. FOR OUR READERS, WHO ARE MAESTER PRESS?
Maester Press was set up by ‘rum drinking friends’ as one director likes to say. It is really the coming together of several companies such as The Image Designs and Novel Development in County Clare, Ireland and it is spearheaded by our brilliant and award-winning graphics designer David Naughton Shires. For far too long, writers were bound by certain conventions and David felt it was time for a platform that offered writers a greater freedom.

THE BOOK IS RIDICULOUSLY POWERFUL AND PUTS BILL BRADSHAW’S NAME UP THERE WITH DÁVILA CARDINAL, RORY POWER, EMILY LLOYD-JONES AND RIN CHUPECO AS ONE OF THE GREAT NEW VOICES OF ALL THINGS WEIRD AND WONDERFUL. SO, WHAT NEXT?
Well, Maester has a schedule well into next year with Horde coming from David Shires, a collection called Little Stories for the Smallest Room and my next book, Three Men Dwell, due in the Spring. Three Men Dwell is based on a true story of The Flannan Isles mystery and it will be the product of several years research.

FINALLY, DELPHINE HAS WON A BOOK OF THE DAY AND A BOOK OF THE MONTH AWARD AND YOU HAVE NOW BEEN VOTED WA AUTHOR OF THE MONTH FOR JULY/AUGUST 2020 SO HUGE CONGRATULATIONS. HOW DOES IT FEEL TO HAVE SUCH A SUCCESSFUL NOVEL ON THE MARKET?
Thank you so much. I’m really delighted with the award but I’m just as happy that Maester Press is now an award-winning publisher. This is a competitive business and Maester is a passion project between passionate friends. It’s based in Lisdoonvarna on the west coast of Ireland and we have been so badly hit by Covid 19. This is a wonderful good news story in these pandemic times and I am genuinely over the moon for everyone involved.

New Free eBook from OfficerPrivacy.com Gives Inside Tips on How to Keep Private Info Secure Online