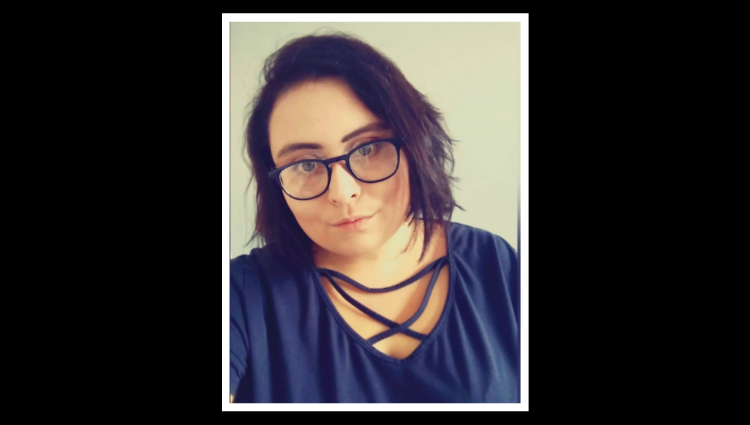 With Love, Maddie is the story of a young girl, suffering from mental illness, who decides to write a diary leading to the day she plans to commit suicide. Follow Maddie as she navigates through a world while coping with depression. How will she feel when she meets a new guy at work who turns her life on its head? Will she follow through with her plan when we get to day 100?

Hello Author Amber R Cotterell! Thank you for joining us. What was it that first sparked your interest in writing?
I’ve always had a love for the creative, I always enjoyed drawing and writing my own books when I was little. From ages 8 to 12 I used to really enjoy writing poems and putting them into handmade birthday cards. Bampy (my granddad) used to always say I would be the next J.K. Rowling, and despite knowing that, that probably wouldn’t happen I always remembered his words.

I started writing again when the second Lockdown hit the UK. I was working early morning shifts and when I finished work I would have nothing to do. I found myself stuck in a rut, doing the same thing over and over again, not really achieving anything and finding that my mental health was taking a toll. I’m one of these people who needs to have a project going all the time. I started writing down ideas of what to write for a story and found myself writing about mental health, something that many of us are suffering from right now.

Your first book, With Love, Maddie, is all about a young woman suffering from poor mental health. How did you feel writing about this subject?
While writing the book I did find myself thinking about the time when I suffered with Depression, I tried thinking about the thoughts that I had and how the ‘void’ formed in my head. I was able to verbalise some of the thoughts and feelings I used to have and put them into the book, which made it easier for me to be able to come up with other thoughts for the ‘void’.

I was slightly worried about writing the book, people have many different versions of Depression and Anxiety and not everyone has the same symptoms as Maddie does in the book. Some of the symptoms that Maddie has are the same as to what I experienced when I was younger and some of the symptoms are ones that I have never experienced and needed to do research for. I wanted to make sure that any symptoms for the mental health disorders in my book were right, so even if I experienced them I would do research on different websites to make sure I wasn’t being factually incorrect.

The book follows Maddie, a young woman on the brink of suicide, tells us about the reason you chose this subject?
I’ve always been interested in writing books about mental health. When I was 15/16 I suffered badly with Depression and Anxiety, I would try to look for fictional books about mental health to try and make my experiences seem more normal. At the time there weren’t that many books out so I felt like my mental health was something that was kept secret. I thought if people didn’t write books about it then I can’t talk about it.

What has your experience of publishing a book for the first time been like?
This whole experience has been completely surreal. Previously any book that I have written I haven’t gone past page 30 let alone completed the book and then had it made into a real one that other people can read. I am really grateful to Churchill Publishing who has helped me the entire time especially Holly-Eloise Walters who I have messaged almost everyday asking for advice or talked to about the book. Writing books is definitely something I am enjoying doing and would like to continue in the future, and I think that has been made more prominent thanks to Churchill Publishing helping me out.

Tell us a little about your favourite character and why?
This is a tricky one, I know that Tom will be an overall fan favourite, he’s a completely loveable and chatty guy, who wants to make everyone smile. However my favourite character would be Sophie. Sophie is the manager of the coffee shop that Maddie works in. She is just as loveable and happy as Tom is but she has a history of bad relationships, which is why she’s so happy to everyone. She knows that it doesn’t pay to be kind but she chooses to be kind because nobody knows what other people are going through. She’s also one of those people who would forgive someone several times for being a nasty person because she just wanted to make everyone else happy.

Did you find any part of the book especially emotional to write?
Anytime I wrote about Bampy. 99% of the things in the story about Bampy are true. The only thing about Bampy that isn’t, is the fact that he has a grave. I found this hard to write about because there have been times in my life where I would have loved to go to his grave and talk to him and feel like he’s there but I can’t. This is why I decided that in this book, Bampy would have a grave so that Maddie could physically be somewhere away from other people and could talk to him freely. The stories that revolved around Bampy, about snakes in the garden or lego houses are real stories, they are things that happened in my life with Bampy.

I also found it hard writing about the ‘void’, the void is internalized thoughts that are almost like another character completely. It has its own voice. Writing these parts was incredibly hard because I had to write horrible things that I would never normally write down. Some of the thoughts like I mentioned before were real thoughts I had and some were imagined and that was hard coming to the realisation of what my thoughts used to tell me about myself, and looking back how wrong they were or how nasty they were.

We’re any of your characters inspired by real life people or events?
Bampy was real as I mentioned above. Most of the family members I used in my family situation, so Maddie has one brother, a mum and dad and in real-life I have a brother, mum and dad. I also have a grandma and nan, however when it comes to the characters themselves I didn’t use a direct copy of my real life family and paste them into the book. I got one characteristic and I blew that personality trait up. So in the book the mum is loud and the dad is quieter, this is true in real life, however that’s where the similarities end. Anything else in the book isn’t about my family in real-life, it’s made up.

There are other characters who have similarities to people I know in real-life, like Doris. Doris is an elderly lady who is deaf and uses sign language. In reality she was a customer from an old job. She would come in and write down her order and I knew hello, thank you and goodbye in sign language and even those three simple signs she would be over the moon with. So her character developed from that.

Finally, if you had to use just five words to describe With Love, Maddie, what would they be?
Sarcastic, educational, hard hitting, emotional and suspenseful.