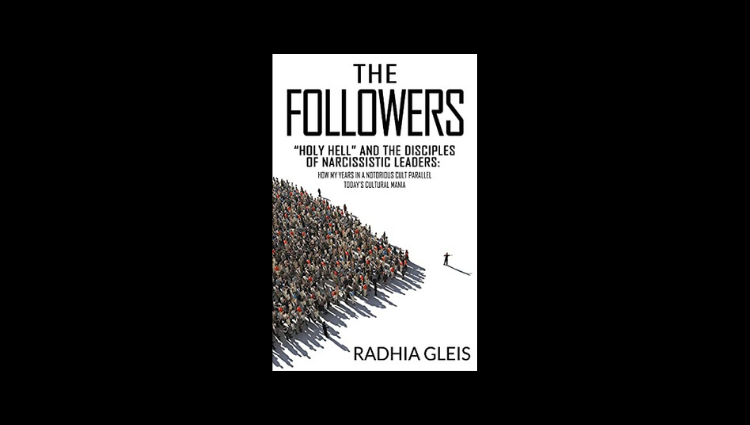 Radhia Gleis spent 25 years of her adult life in the Buddhafield cult, under the influence of a narcissistic sociopath known by many names: Michel, Andreas, The Teacher or Reyji. She escaped the psychological prison of cult life over 12 years ago, but the emotional scars remain. The post-traumatic stress, forever entombed in her psyche, is repeatedly triggered by the characteristics of political and cultural leaders of today, prompting her to explore her past decisions through a much broader lens that sheds light on the blind spots — and dangers — of groupthink.

“What makes people give up their will, their sense of right and wrong — give up their moral compass and family ties for a person or an ideal?” Gleis asks in her captivating new book, The Followers: “Holy Hell” and the Disciples of Narcissistic Leaders: How My Years in a Notorious Cult Parallel Today’s Cultural Mania, giving a nod to the 2016 Buddhafield cult documentary Holy Hell, in which she appears.

The Followers lays the groundwork by skimming Gleis’ upbringing in Hollywood and tracing the steps of her adult life, when, at the age of 30, she fell under the influence of the charismatic leader of Buddhafield.

She draws striking parallels between her devotion to a cult leader — an authority — whose damaging behavior and influence she willfully ignored, and the followers of other authoritarian leaders, both past and present.

Gleis weaves her personal experiences with reflections on a number of thought-provoking topics, including:

• The search for a higher truth

• How an intelligent, well educated person may find themselves under the control of a narcissistic sociopath

• The three basic types of people who join cults

• The power of words/influence of media

Informative, raw and irreverent, Gleis’ book shares the unvarnished truth about cult followers from the viewpoint of a former follower still grappling with the consequences of her choices.

Author Radhia Gleis is a Certified Clinical Nutritionist, CCN, MEd. biochemical analyst and educator for over 33 years. She has appeared as a featured guest on numerous radio and television shows including Fox News, Austin. She hosted The Health Revolution and Let’s Get Healthy on Talk 1370 AM, KLBJ, and The Wellness Connection podcast on Voice America. She was the host and executive producer of three YouTube series: Wake up America; How the Body Works; and The Natural Way. She was featured in the internationally viewed movie, Holy Hell, which was broadcast on CNN and named one of Sundance Film Festival’s and Netflix’s top 10 documentaries. It can now be viewed on Amazon Prime.