Every year since his start as President, Trump has attempted to eliminate funding to libraries, and 2021’s budget proposal tries once more. The 2021 budget proposes to eliminate the federal Institute of Museum and Library Services (IMLS), which funds research, offers policy development, and provides grants for museums and libraries, among other roles.

“As the primary source of federal funding for museums and libraries, IMLS invests in communities of all sizes, from rural to urban, in every U.S. state and territory,” reads a statement from IMLS. “IMLS ensures public library services for all Americans, helps preserve the heritage of our nation, and provides critical funding for literacy and workforce development programs.”

IMLS is a crucial tool in documenting and preserving American culture and history. Recent initiatives include helping veterans in their transition back to civilian life and share their experiences, helping children in rural areas learn to code, and sharing the history of jazz in Harlem.

IMLS also offers those who work in libraries and museums the opportunity to expand their knowledge and bring it back to their communities.

“I was a [Public Library Association] Leadership Academy Fellow in 2017. That experience was funded through IMLS,” said Lisa Mulvenna, head of youth and YA services at Clinton-Macomb Public Library (MI). “Through that experience, I have enhanced my leadership skills, which do impact my library and what we are able to offer.”

As pointed out in previous assaults to the budgets of these organizations, beloved and well-known events would see their end, including the National Book Festival (funded by NEA and IMLS), the NEA’s Big Read program, and regional book festivals, and more. The NEH has also spearheaded significant projects, including the Library of Congress’s Chronicling America digital historical newspaper collection.

The 2021 budget, titled “A Budget for America’s Future” proposes an increase in spending on military, Veterans Affairs, and NASA while eliminating the above social programs, as well as making cuts to Medicare, Medicate, and the Environmental Protection Agency. 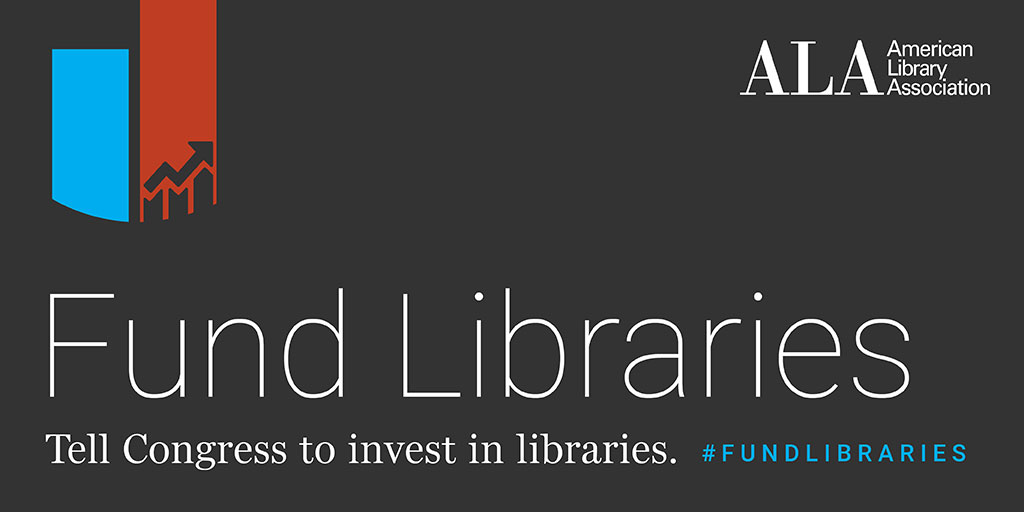 Each of the last four years have brought significant pushback for the elimination of these programs, and each year, the budgets have been restored and even increased. For fiscal year 2020, despite an initial cut in funding, the final budget included an increase of $10 million in funds made available to IMLS. This included an increase in money made available via the Library Services and Technology Act, which allocated those funds as grants to states, Native American Library Services, National Leadership for Libraries, and more.

The American Library Association (ALA) credits the work of members and advocacy groups for the arts and humanities for reinstating those budgets in each year of the administration. They’ve worked, too, to keep living databases of each state’s representatives and their voting records as they relate to IMLS, as well as highlighting what the money given to IMLS goes toward each year.

2021’s initial fiscal budget will once again require a groundswell of support to #FundLibraries, particularly as it’s become evident that this attempt to remove support will return if not regularly pushed back against.

“ALA takes the White House proposal seriously,” ALA president Wanda Brown said in a statement. “After three years of consistent pushback from library advocates and Congress itself, the administration still has not gotten the message: eliminating federal funding for libraries is to forego opportunities to serve veterans, upskill underemployed Americans, start and grow small businesses, teach our kids to read, and give greater access to people with print disabilities in our communities.”

Americans for the Arts, a watchdog and advocacy group for the arts and humanities, noted that the previous attempts at cuts were thwarted and that pushback and demonstration of the need for cultural enrichment not only challenged the cuts, but increased them.

“For more than 50 years, the NEA has expanded access to the arts for all Americans, awarding grants in every Congressional district throughout all 50 states and U.S. territories, particularly benefiting communities that have fewer opportunities to experience the arts,” said CEO Robert L. Lynch of Americans for the Arts. “It’s because of this that Congressional appropriators have chosen in the previous three years to reject the administration’s call for termination of the agency, and instead provided increased funding—in FY 2020, an additional $7.25 million in funds were added over FY 2019. I expect to see similar action by Congress this year, and hopefully a $7.75 million increase.”

Given this election year and Census year is one that is particularly fraught—and one that demands libraries step forward to be part of the civic duties of Americans across  the country—libraries must put forth their best when it comes to showcasing their essential roles in their communities.

“When it comes to demonstrating the value of libraries, advocates have more stories to share in 2020. By promoting a complete count in the 2020 Census, libraries are ensuring that appropriate federal resources are getting to local communities. By hosting town hall meetings and facilitating voter registration, libraries are encouraging civic engagement,” said Brown.

Libraries are becoming too used to this fight, but it doesn’t make it any less crucial. By speaking up and pushing back, those who work in, with, or love libraries and other public institutions and repositories for knowledge and culture stand on the side of history protecting our collective, unique, and vital history and memory.

We can’t help veterans without preserving their memories, experiences, or affording them places to grow their education. We can’t become stronger in defense without the arts to teach what it is that’s worth fighting for. And we cannot better protect our country’s people without having the money to invest in them directly, right in their own communities. The work for a “Better America” starts by investing in what America is best for: giving people the freedom to learn, to explore, to share, and to know that they’re being served by those invested in their well-being.

That doesn’t come in the military. It comes from libraries and other cultural institutions.

Brown encourages everyone invested in the future of library services to reach out to their Congressional representatives and demand they fight to restore funding for IMLS, NEA, and NHA.

Sign up to Today In Books to receive daily news and miscellany from the world of books.