On the Visibility of AIDS and HIV in Literature

I never learned about AIDS or HIV in school. Admittedly, I was in high school in the early aughts, but it seems the education surrounding the AIDS crisis of the 1980s and the current statistics of HIV and its prevention are still mostly left up to individual school districts.

AIDS was something I couldn’t get, or so I once believed, so it wasn’t anything I needed to worry about. As a teen, what I learned about it largely came from gossip and if I happened upon it in any of my books (unlikely). I knew it as a “gay disease”—something that is wildly inaccurate and offensive, but the stigma surrounding AIDS and HIV is so pervasive to this day, and discrimination against people living with HIV is unfortunately still a common occurrence, so discussing it head-on is the best approach to understanding and empathizing.

What are HIV and AIDS?

HIV affects cells that help fight infection, so people who are HIV-positive are much more vulnerable to infection and diseases. If left untreated, HIV can lead to AIDS.

What happens when you have HIV or AIDS?

If you live in the United States (or a wealthy country), typically, people who test positive for HIV are prescribed a medication that stops the disease from progressing. This medication allows people living with HIV to live long and healthy lives and prevent transmitting HIV to partners.

Many other countries suffer from widespread HIV for a variety of reasons, often including high cost of medication and patriarchal societies restricting access to medication.

Why should we be talking about HIV and AIDS? 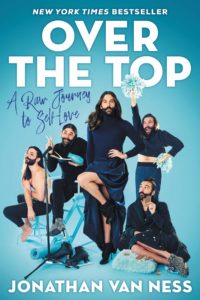 Earlier this year, surrounding the excitement and press tours for Queer Eye star Jonathan van Ness’s memoir release, Over the Top, he revealed to the New York Times that he is HIV-positive.

“The Trump administration has done everything they can do to have the stigmatization of the LGBT community thrive around me,” he told the Times. “I do feel the need to talk about this.”

Van Ness discussed the difficulty of revealing this information to partners and how little knowledge is out there about HIV. While there are materials and resources discussing living with HIV and AIDS, they are few and far between, many dating back to the 1990s. Very few books about AIDS exist telling the stories of people living with the disease in today’s culture.

However, AIDS did not disappear after the AIDS crisis in the 1980s. According to HIV.org’s global statistics of 2018, almost 40 million people across the globe are currently living with HIV/AIDS. HIV is identified as the cause of one of humanity’s deadliest and most persistent epidemics.

Why are books about AIDS and HIV so hard to find?

Once I realized how little I knew about this subject, I, of course, turned to books. But the few books about AIDS and HIV out there seem to be heavily focused in nonfiction and were all released years—sometimes decades—ago. Where were the modern stories? The YA books? The books young people could look to when gossip around school gives them incorrect information?

2019 has seen several new young adult releases featuring characters who live with HIV or who are experiencing the AIDS crisis, including Like A Love Story by Abdi Nazemian, We Are Lost and Found by Helene Dunbar, and Full Disclosure by Camryn Garrett.

Why is it important for teens to read books about AIDS and HIV?

As with any subject, teens (and everyone, really) need relatable books to read that use their lexicon, their daily life, their friendships. Modern books with characters who encounter AIDS or featuring characters living with HIV help simultaneously destigmatize and inform young people about the disease.

Teens today are being recognized as one of the most racially and ethnically diverse generations yet, as well as one of the most inclusive and educated. If the AIDS crisis is not being taught in schools, providing young readers with access to relatable stories about people living with HIV will not only help them understand, it will set them up to be more informed, more empathetic, and more inquisitive not only about one specific disease and those it affects, but many health issues that disproportionately affect marginalized communities.

Note: The writer of this article works for the publisher of We Are Lost and Found. Its inclusion in this article is entirely the writer’s own choice and opinion.

Join The Illustrators Participating in #FolktaleWeek2019

The Stories in This Chicago Housing Project Could Fill a Book